Out my window. Glimpses from our journey in Europe.
Sometimes it’s picture book surreal and other it’s autobahn efficient or industrial. Come along for the (slow) ride.
It’s great (such a relief, scary and thrilling) to be moving once more. Our mechanical hurdles in Germany overcome we now head into southern Switzerland. We arrived from Germany 3 days ago to stunning snow capped mountains, it’s all melted off now I think. This week is a heat wave with 30 Celsius plus every day. Up front in the van it says 43! It’s hot for around here.  It’s painfully hot to be driving in this old mobile with all the windows down. Keep cool people. We ran into a stau ( kilometres of traffic jam) soon after this”)

Lakeside Vevey here we come! We’re heading to the Montreux Jazz festival. We heard its good busking for Jesse and the children and I can chill out by the lake. Hopefully it’s as good as it sounds because we left a natural paradise in the mountains to come down! The first day and night was Terrible! Too hot too tired too busy too grumpy nowhere to camp not coping  I want to go home! But after a few hours sleep in a hot train side, car park (glamorous) the next day was better. There is a side to this journey that is absolutely crap and incredibly challenging. The idea is that it’s outweighed by goodness, time together, adventure, inspiring connections and natural beauty. It usually is, but I’m still getting the hang of it only a week into the ride.

All signage has just gone from German to French, HELP! With three ( oops four languages! my swiss friend corrects me. ) national languages Switzerland is an incredibly diverse ethnic country. My family all live in the Swiss German cantons but I wish I had a better grasp of French alongside my German.  At any time I can hear a handful of languages in the city which thrills me after living in a small rural community for some years now. People watching is so fun.

Stinkin hot right now but oh so pretty in the rolling hills! Yodeleeehee…. 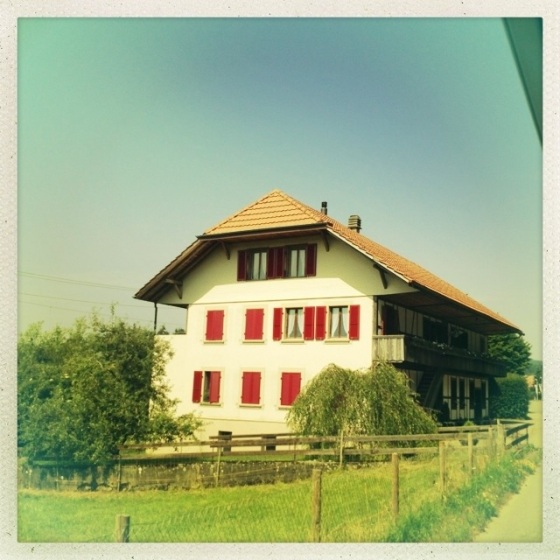 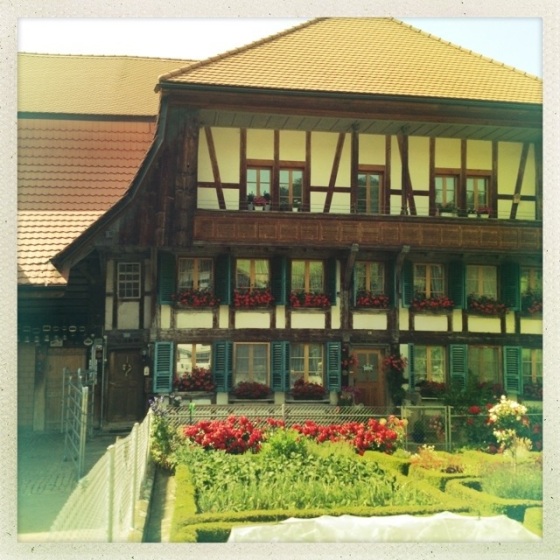 Summer is in full glory the golden crops are being harvested, hay is being made and flowers abound! 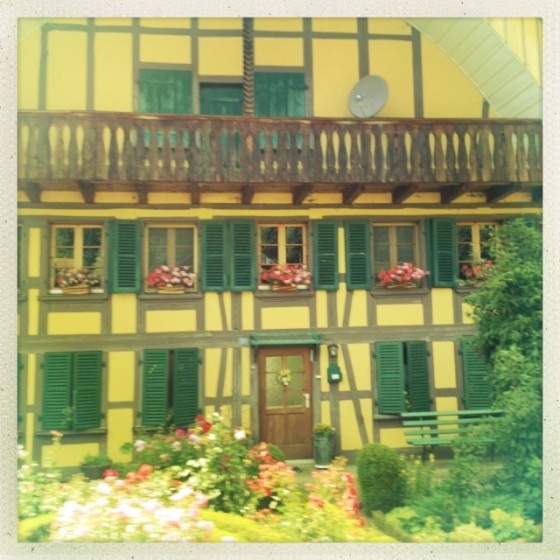 We wonder a lot at the size of these beautiful old houses. Was it because large families lived together. Or simply when you spend so many cold months indoors you need more space or some other…. I understand there is a lot of indoor storage space for food etc, and often the animal stalls for winter are under the same roofline. I’ve been lucky to explore a couple of these type of houses. As a child we visited friends of my mamas in the Bern hills and I remember the guest room next to the animal stalls. The pungent smell coming through the walls it seemed, never mind the drying sausages hanging in the bathroom….  I’m hoping to visit these kind farmers again on this trip, they are some of the few elders still living an incredible nearly self sufficient traditional farming life. I’m imagining the pot of warm fresh milk will still be there on the back of the wood stove!

I’m interested if anyone knows if it should be Ouside my window, or is Out my window passable English?

My English is going out the window! In our family we is speaking richtig gut Denglish, deutsch/English.

4 thoughts on “Out my window”

I source alot of our books from here

What I muse about…

looking for something specific?